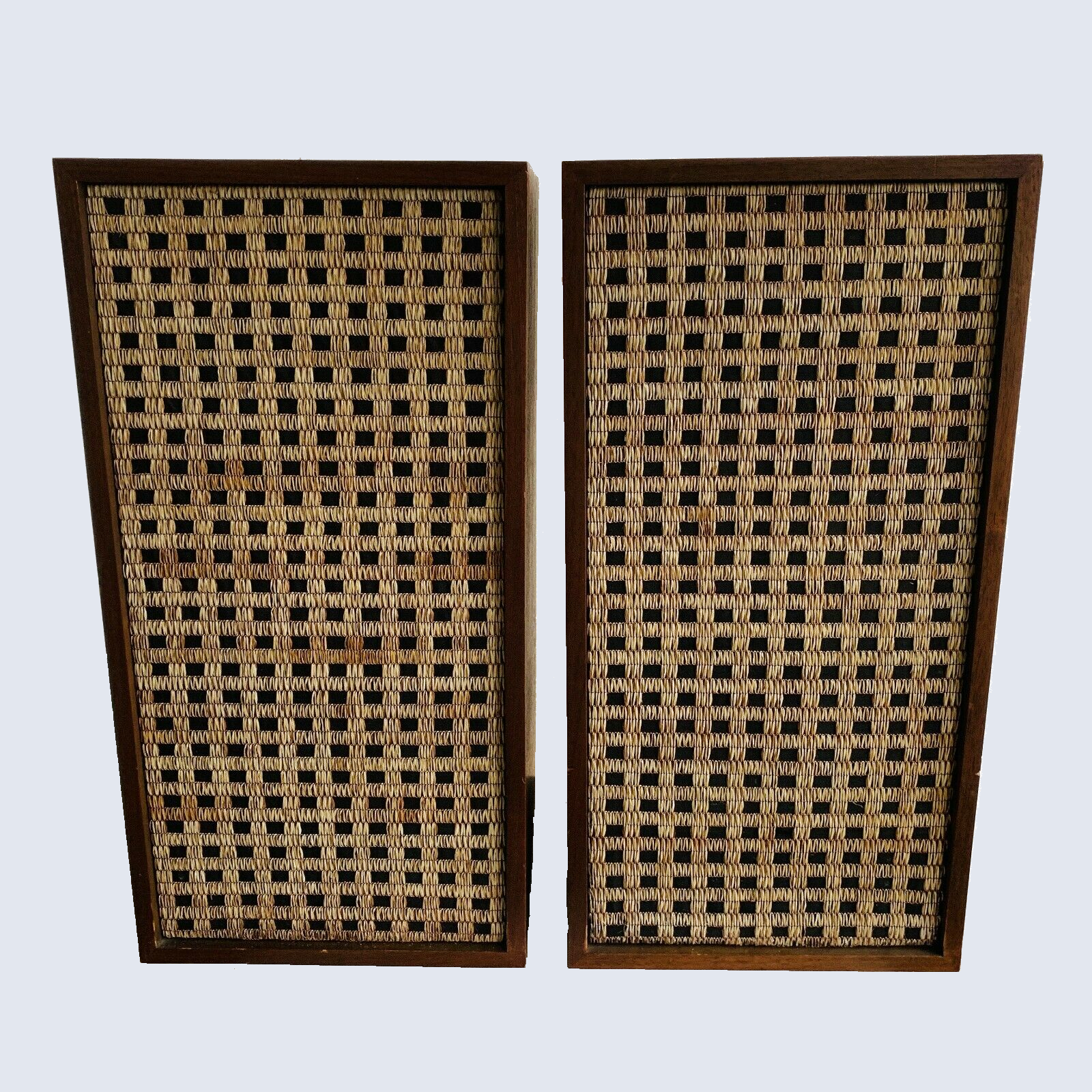 Awhile back, I posted on social media that I have been watching a particularly interesting set of speakers on eBay. These speakers are the Dominion Electrohome Kitcheners with the model number 2428. In case, you didn’t know, these speakers date all the way back to the 1950s! Well, based on my experience with my 1960s Electrohome SC 490s which you can read about here, I decided it was a good bet that these speakers were going to be a good set. After making a few negotiations with the seller, I ended with them for exactly $135.

A Little Background Information On The Old Electrohome Brand:

As usual, not too much is known about the Electrohome brand. For the most part, not too many of their speakers have survived the decades. The few that have survived are out there either waiting to be found or waiting for someone to buy them.

Now, here’s a surprise that’ll give just about any speaker collector more trust in an old school set of Electrohomes. Almost all vintage Electrohome speakers use Jensen drivers. So while the cabinets were built in Canada by Dominion Electrohome, the drivers were actually built by Jenson in the USA!. Jensen drivers are very well-built and tend to have a strong, warm, and full sound.

As you can see: Electrohome was excellent at making cabinets. Just look at my Electrohome SC 490s. They look absolutely great. The Electrohome Kitchener 2428s also look fantastic. But with looks aside, the cabinets are built strongly to withstand the years. 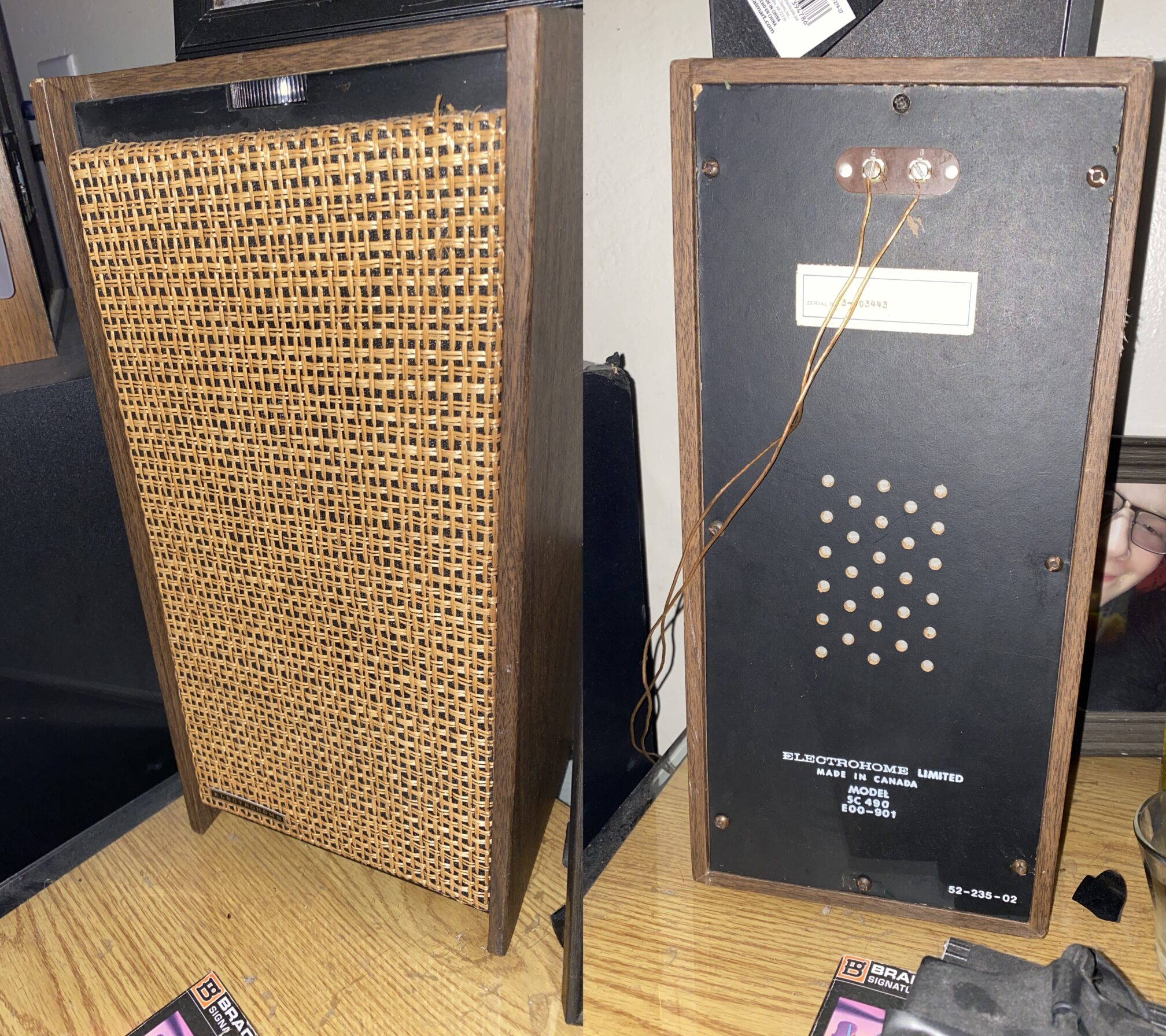 But hidden behind this, is a set of nicely paired vintage Jensen drivers. Now you see where I’m heading? You are getting a good-looking set of almost ancient speakers that not only look fantastic, but more than likely have survived the decades and sound as good as they look. For a good set of vintage speakers, this is what you want.

Now, the main thing that pretty much all speakers as old as the two pairs of Electrohomes that I have acquired, you’re going to need to recap them. Capacitors tend to have their values drift causing a significant increase in resistance which causes less power to make it to drivers that are crossed over. So keep this in mind for being quick to judge any 35+ year old set of speakers. Let alone, a set of Electrohomes that are pushing 70 years old.

After ordering the “new” Electrohomes, I went through the usual long and grueling phase of anxiously waiting for new gear to arrive. While this is all part of being an audiophile, it is even more so intense when you do not know what expect with vintage gear this old. This has caused me to want to do some extensive research. I should’ve already known that I wasn’t going to find much: As I didn’t.

I did however find a thread on AudioKarma of someone asking whether they should take the plunge on (you guessed it) a set of Dominion Electrohome 2428s. Well, the op basically went ahead and picked them up. He said that his Electrohomes have a surprisingly good low end response. He basically said “These speakers have a surprising amount of clean and punchy bass but not a whole lot in the treble department”.

This AudioKarma thread has since been deleted. But reading that had got me hyped up even more. As I have stated previously, speakers this old need to be recapped. These Electrohome speakers are no exception to this rule. And upon looking closely at the one photo that showed cabinet opened up, the tweeters in these speakers looked identical to the ones in my Electrohome SC 490s. I know how good these tweeters are. As I’m currently listening to them as I listen to my desktop system.

Then just a day and a half later (literally I ordered them Monday evening on the 17th of May and they arrived early morning on the 20th. Shipping was supposed to be 5-7 day shipping. This surprised me as I was getting ready to go somewhere. Only to open the door to two large boxes sitting right outside the door.

Immediately, before I left, I brought the boxes inside. I started unboxing one immediately. My first impression was total astonishment. The build quality on the cabinets was the best I’ve ever seen on a set of speakers. As anxious as I was, I had to fight myself from wiring them up to a receiver I got back.

The First Listen: The Sound Of Lack Of Use and Age… 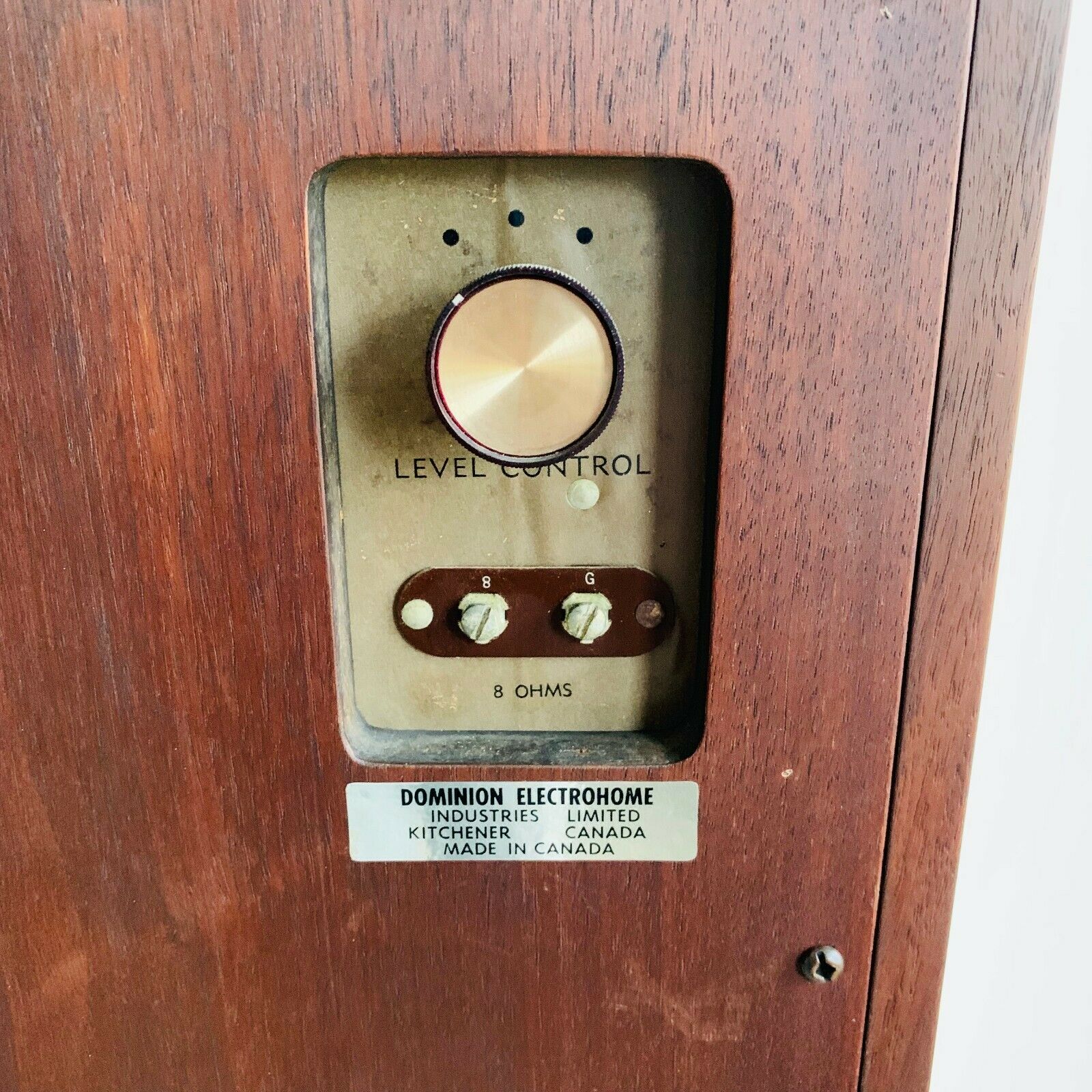 No, this heading really isn’t a joke. Upon first listening to these old Electrohomes, they weren’t happy to be woken up from the dead. The woofers had a little voice coil rub despite having cloth surrounds. The tweeters were completely inaudible. One thing however that did catch me off guard was the fact that the mid range was strong despite the aged capacitors. Like my Electrohome SC 490s, I decided to let the Elecctrohome Kitchener 2428s play for a few hours.

Later on, I decided to come back and take a listen. When I walked into the listening room, I was immediately greeted by a warm, punchy, and clear low end response. The voice coil rub was completely gone. The woofers had managed to clear up. The mid range drivers, which already sounded bright earlier, sounded very clear and present. With late 1950s era speakers, this came as a surprise to me. The tweeters however, were still inaudible. I almost became worried that they were actually blown. The tweeters, being identical to the ones in my SC 490s, I expected a lot more out of them.

To confirm my findings, I opened DSP Studio on JRIver Media Center and cranked up 16KHz on the parametric equalizer by 10 decibels. Suddenly, I could hear some faint life coming from the tweeter on the right speaker. Another 5 decibels later, I could hear the right tweeter a little more. The left one finally became audible but was still weak. Another 5 decibels after that, the upper treble was finally easily audible. This came as a sigh of relief for me as the tweeters were very much alive. 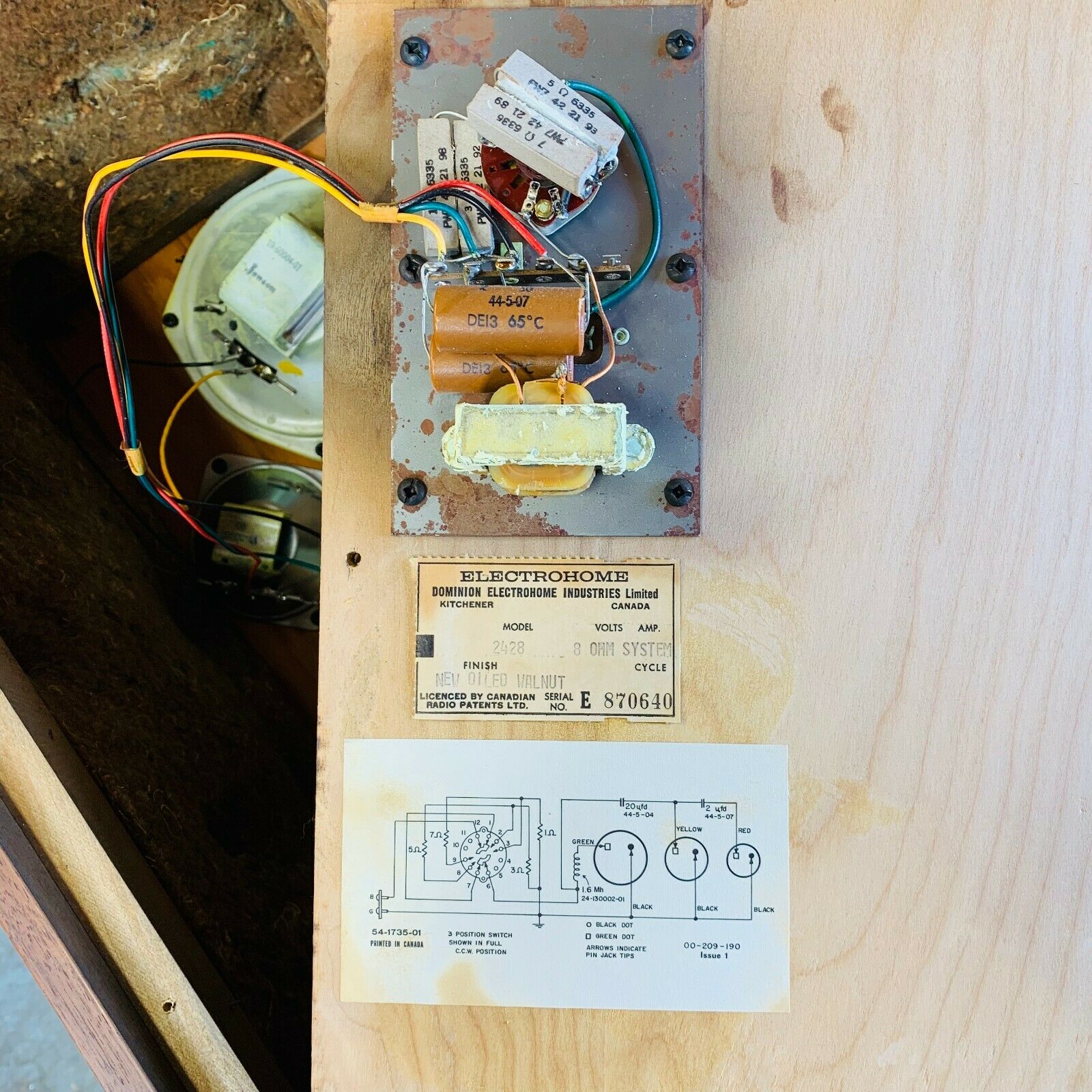 Going back to what I said earlier in this post, the crossovers are more than likely to blame. These speakers are pushing 70 years old. The capacitors in a set of vintage speakers tend to drift and become more resistant to current. This causes less power to get to driver that the crossover is on.

In this case, the tweeters aren’t easily audible due to a very high amount of resistance in the crossovers. While, some capacitors can last a long time (around 30 years), most will start increasing in resistance within 20 years. This aging is amplified when the speakers are rarely played.

From the looks of these Electrohomes, they look like they’ve never really been pushed. The cabinets are literally flawless. Literally. The fact that these crossovers work at all is very surprising to say the least even with a 20+ dB increase at 16K. Especially, the fact that the mid range drivers are also very forward sounding.

So Overall, How Do They Sound?

So far, these speakers have been a very interesting set. As I said earlier, I expected these speakers to be mellow, warm, and colored like my Electrohome SC 490s. This however was not the case. Instead, the Electrohome Kitchener 2428s actually have a very studio-like sound. By a studio-like sound, they are flat in a way the reveals the recording or mix as it was originally heard on monitors.

For example, a bright sounding mix comes out bright as it should without sounding fatiguing. Rather, you can literally hear every detail. The same goes with a warm sounding mix. The Electrohome Kitchener 2428s have a very clear, studio presence. Transient response is extremely impressive because of this.

Low end is were these Electrohomes got me. The Electrohome Kitchener 2428s have 8″ woofers with cloth surrounds. Cloth surrounds not only last for eternity, they also have the tendency to be very punchy sounding. This combined with the smaller 8″ woofers make for a good combination. The cabinets also feature rare vent styled ports. The ports consist of a slotted port that are about an inch and a half tall and span the whole base of the cabinet. The top of the port is wood that leaves another “slot” inside the cabinet. This port is concealed by the non-removal grill. They definitely don’t build speakers like this anymore. I found that the port is tuned just right. These old Electrohomes almost sound like they are sealed.

Both the lower and upper mids are extremely wall balanced and detailed. I found the Electrohome 2428s a tad bit warm. I could imagine that this warmth would be tamed with a crossover recap. This was the case with my Electrohome SC 490s.

Now For Treble: Despite having almost totally shot crossovers, I was able to get a decent amount of treble out of them. Lower treble was mostly handled by the mid range drivers. The lower treble was very present. Right around 13Hz when the tweeter is supposed to take over, There was a massive roll off due to the ancient crossovers. With the 20 dB boast at 16kHz, this roll off was eliminated completely.

I found that these Electrohomes had a very nice top end to them. The treble is very transient with excellent tonal quality. Imaging was also on point with the rest of the sound despite the tweeters being off to one side (the right).

For soundstage, I was pleasantly surprised with how good the Electrohome Kitchener 2428s imaged up close. You don’t have to set far away to experience a rich, lush sound stage. I did find however that these Electrohomes like to be spread far apart.

There You Go, Yet Another Set Of Electrohomes That don’t fail to impress.

Despite the shot crossovers and the fact that these speakers are nearing 70 years old, they still sound amazing. This a testament to the build quality of vintage Electrohome speakers and Jensen drivers. While, Electrohome is long gone, Jensen is still alive. Had the two remained partnered up, we would have many more speakers built like this.

As always, thank you for reading my review. Now, enjoy the 1950s sound that these speakers are full of! Feel free to ask any questions below and I’ll be sure to answer them.