Who would’ve ever thought about this? A HiFi system on your desk? Who’d need that you might ask? Well I’m here to introduce you to the computer audiophile in me.

I’m a PC enthusiast who spends a lot of time at my desktop. I built my PC to be able to handle everything I do. I’ve been into computers my whole life. Later on as I grew up, I started working and was able to buy my first component. This is a 1981 JCPenny stereo receiver.

I came across this receiver at a garage sale. I ended up buying it for $7. It was my introduction into vintage audio. The start of my collection. Yes, she sounds as good as she looks. I acquired a set of Pioneer CS G203 speakers the same day. It had the widest soundstage I’ve ever heard at the time. This receiver from what I know is rated for 25 watts RMS per channel. It drove the Pioneers loud enough to rattle the room. To put it straight: Nowadays, many manufacturers lie about the power ratings. I had a Sony stereo receiver rated at 50 watts per channel. I can’t remember the model but it was from 2013. This JCPenny receiver was just as loud, if not, louder. Not only that, it sounded light years better. It reminded me of my Dad’s old setup. This is why you should always look for the “RMS” rating.

A look at how this receiver fit the bill for a computer set up.

Looking at how much time I spent at my PC, I decided to set up a HiFi system for my freshly built “at the time” PC. This receiver was perfect. It served as a great monitor stand to hold my monitor higher up. This receiver is the perfect size physically It was also just beautiful to stare at. It also has an amplified headphone jack and a great FM tuner. Now I just needed speakers.

The Pioneer speakers were floor standing speakers. I did actually put them on my desk just for fun. I only could describe the sound as “in your face”. It made for a very humorous photo however. 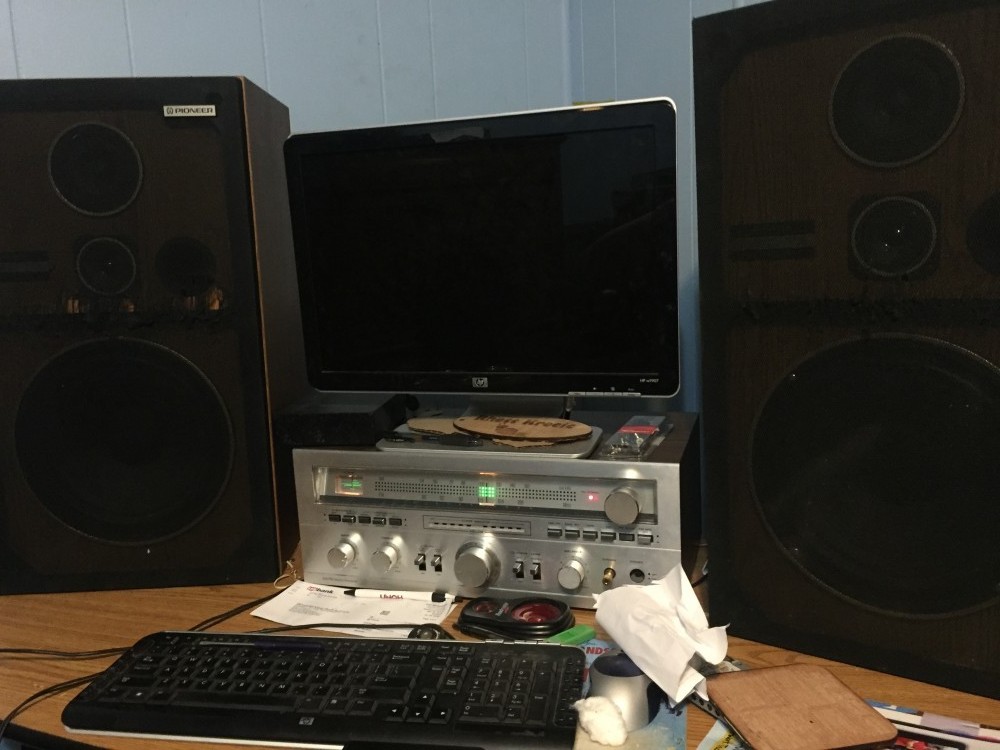 At the time, I had a set of old Sony SS-u3030 studio monitors. These speakers had a neutral but very good sound to them. The frequency response was as expected out of a studio monitor. The woofers however had dry rotted foam surrounds. I replaced them with early 90s MTX Magnum woofers that I had lying around. This woke them up. The MTX woofers surprising maintained the flat frequency response. They had such an accurate low end. I could describe it as even, punchy, yet very forgiving to poorly mixed tracks. The original Sony tweeters still sounded decent at the time. They were ever so slightly recessed. Thankfully the MTX woofers were very well designed. They could take care of the mid range all the way up to 3k. The tweeters rolled off right at the point that the MTX woofers did. Turning the treble up woke up the Sony tweeters. They were detailed and very good at producing treble all the way up to 20k. The speakers also were stuffed with dampening foam from the factory. These speakers were great. Unfortunately, the foam surround deteriorated on the MTX woofers. I still have these speakers. I hope to bring them back in a later project. The MTX woofers are extremely rare. I have yet to find them anywhere. Re-foaming kits are no where to be found. I did manage to get a good video of them in action.

The system has definitely changed since then. One day while visiting my local Goodwill, I had an interesting experience. The lady working there was wondering if I was finding everything Ok. I told her that I collect audio gear and was looking for a set of vintage bookshelf speakers. She said “You’ll want to see these.”. In the front of the store, they had a pair of old Electrohome SC 490 speakers that were in complete mint condition. I couldn’t find anything about these speakers online. judging by the build quality and design, they have to be at least from the 1960s. I also bought a couple of Sony SA-WM20 powered subwoofers to assist the Electrohome speakers given their small cabinets. Their low end also rolls off sharp due to their high sensitivity. They scream at you even when the power indicators show 15WPC. For now, enjoy the video although it doesn’t do the system too much justice. It sounds way better in person.

I also have added the FX-Audio Tube-01 pre-amplifier and tube buffer. For those who aren’t familiar, a buffer basically adjusts the resistance on both connections so that the audio signal does not get degraded. I also installed a sound card as an upgrade over my PC’s on-board audio. The sound card is a Creative Labs SoundBlaster Live! that I had found in an old Dell PC. This sound card provided a noticeable improvement over my PC’s on-board audio. Later on, I read that the DAC used has been in many Soundblaster cards and was well known. My streaming service is Tidal HiFi Plus. I have Tidal set up to stream through JRiver Media Center so that I can bypass Windows DirectSound, upsample/downsample as needed, and use DSP if needed. Though, the system currently needs none. It sounds good as is It sounds like I went overboard but figuring I spent less than $150, it’s worth the result: Classic HiFi at my desk.

As always, check back for more! I will be going over other components in this system as well as my other set ups!