In this review, we’re taking a look at the FX Audio Tube 03 tube pre amp buffer. For those who aren’t familiar, a tube buffer is a device that acts as a bridge. In a nutshell, it balances the voltage coming from a playback device such as your DAC or sound card and balances it to your receiver or integrated amplifier.

This results in a cleaner overall signal for the receiving device. Not only do you get a cleaner signal from the source, you also get a slight increase in gain which is often rather weak on most DACs and sound cards. And, as the icing on the cake, you get a bit of tone added to your audio playback thanks to the nature of tube gear.

Now with that out of the way, let’s get onto the review of this tube pre amp buffer.

The Tube 03 is special in which it incorporates op amps to add tone controls. This sets it apart from standard tube pre amp buffers such as the FX Audio Tube 01. These op amps are also replaceable giving you the option to upgrade them.

I specifically choose the Tube 03 to add tone controls to my Kenwood KR v126r. While that receiver has a great equalizer, simple bass and treble tone controls are easy to get the right balance. Not only can adjusting an equalizer be time-consuming, in many cases, having tone controls can work in tandem an EQ.

A great example of this is my Yamaha NS a637s. They’re smaller speakers but are not only capable of handling 70 WPC RMS, they can take a bit of low end power and produce a solid, thick low end. This can only be achieved with power, an equalizer, and tone controls. By dropping the 150Hz slider way down and cranking up the 60Hz band, I’m able to now use the bass knob to push extra power I have on tap towards the sub bass regions. This results in amazing bass response out of a set of speakers that most would run a sub with.

I also wanted to breathe some warmth into this Kenwood as it is a very pure sounding receiver. Neutral sounding is great for accurate playback. But, having a little added warmth can make listening sessions that much better. Lastly, my source device had a weak output signal that just wasn’t seen. I had to crank the receiver up a bit to compensate.

The Unboxing – I Was Surprised.

Way back when I bought my Tube 01, it came in a rather plain cardboard box. All that was included was a 12v power supply, the stock tubes, and a user manual. This was back in 2018, mind you. FX Audio was still new to the game. 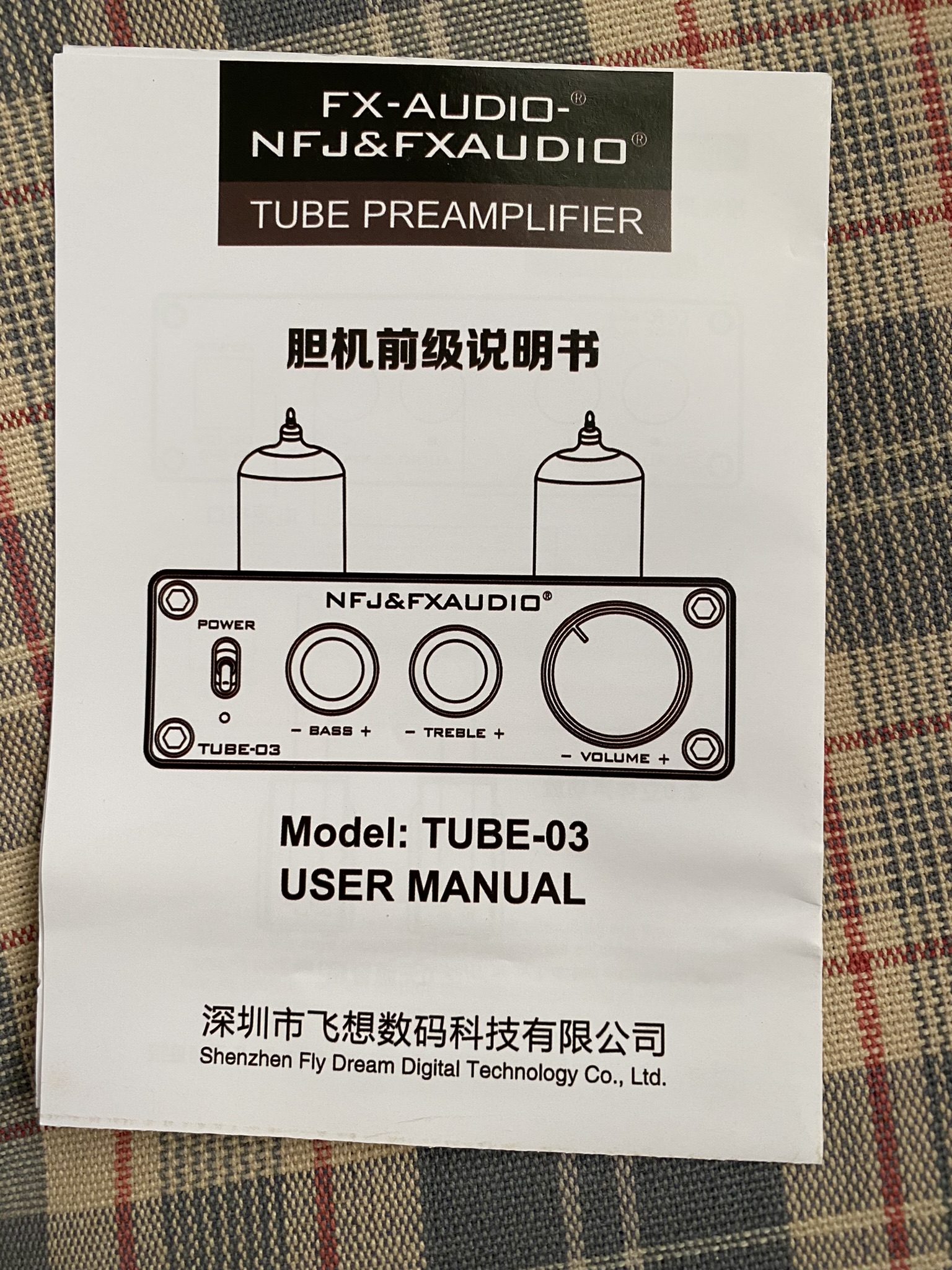 The Tube 03 came in a white box that was significantly better. Having tubes shipped can be dangerous. It is safe to say that the 6K4 tubes that came with the pre amp were protected. As a bonus, you get a solid gold-plated RCA cable. This is a nice bonus. 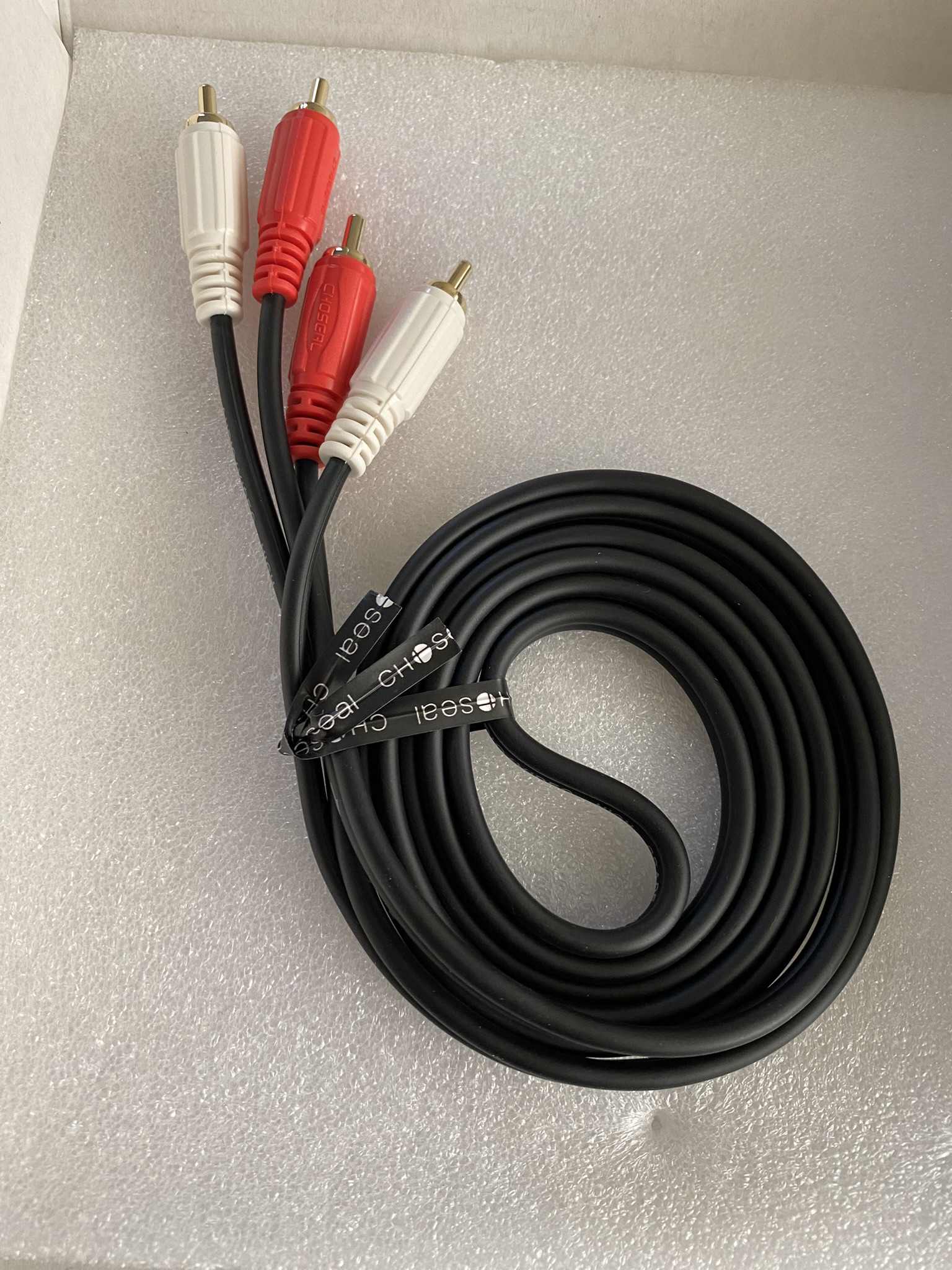 Installing The Tubes – So Satisfying

If you never have installed tubes into gear before, you’re in for a treat. The tubes were relatively easy to install. Take extra precaution and ensure that the pins line up well. If you bend a pin, you might be able to straighten it out. This is difficult to do.

As long as you line the pins up, the tubs will literally “sink” in. It is all part of the experience. Especially when you roll tubes later on down the road. 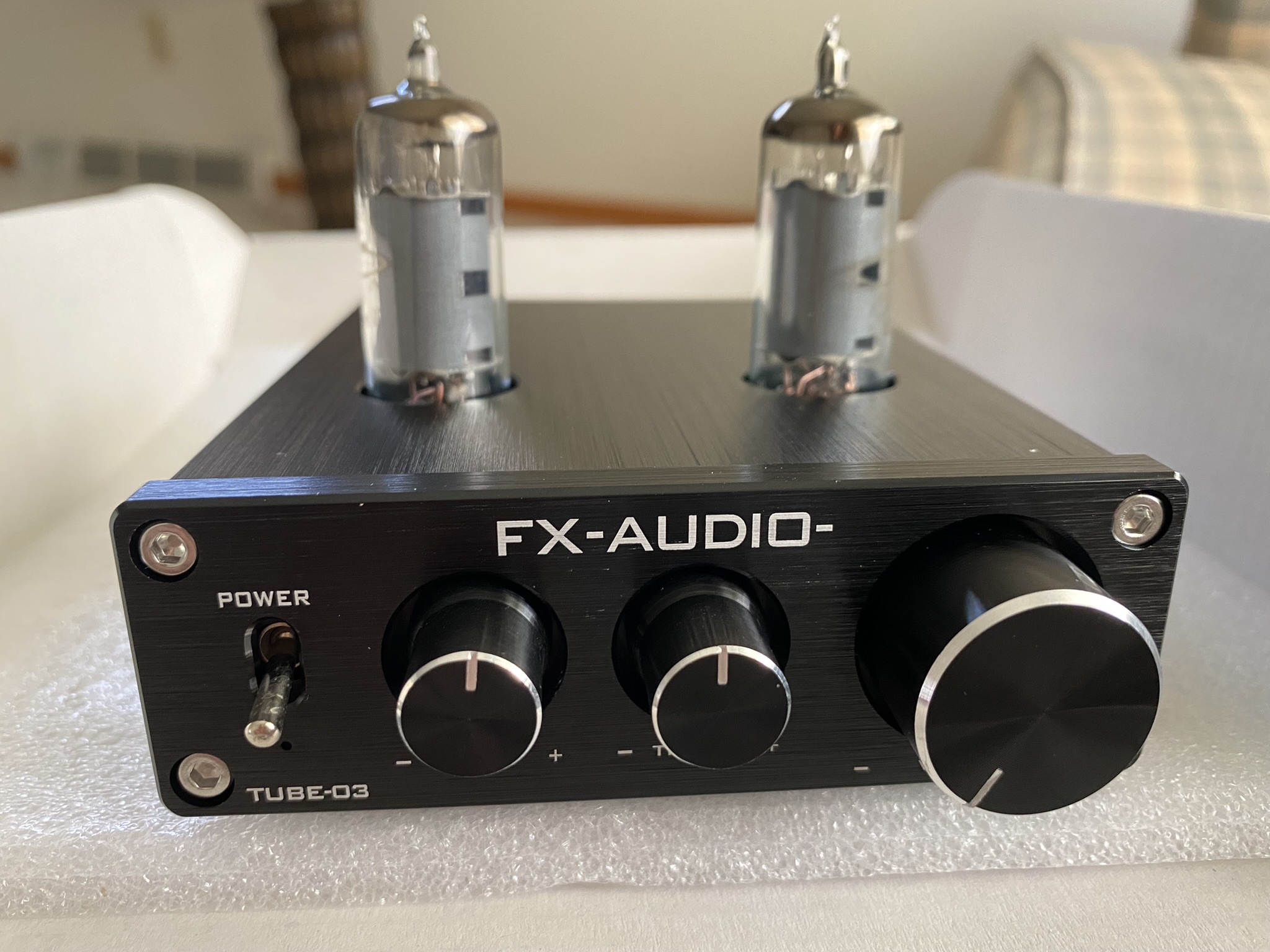 The First Hook Up

Watching the tubes start to glow slowly was satisfying. I knew I seated the tubes correctly. Again, part of the satisfying experience of tube gear. The Tube 03 also has LEDs inside the tub sockets. I do wish there was an option to turn these LEDs off. While they do add a nice touch, I do like the natural glow of the tubes.

Upon hooking up the FX Audio Tube 03, I was immediately greeted with a significantly more forward lower mid range. The difference was so big, that I actually had to drop the 300Hz band down a few clicks on the Kenwood’s EQ. Another thing I noticed was the lower roll off in the top end. It seemed as if the sound was muffled a bit up top.

I decided to let it play for a while to burn the tubes in. One thing I noticed was how much warmer the Tube 03 can get compared to the Tube 01. The Tube 01 uses the smaller 6j1 tubes while the Tube 03 uses the larger 6k4 tubes. I do believe this is why. I just didn’t expect such a difference in heat.

After a few weeks of use…

After a few weeks of use, the top end was no longer muddy sounding. I did also notice the sound signature become a bit more “lush”. Otherwise, I didn’t notice too much change, The sound was significantly warmer which gave my Kenwood KR v126r a far more friendly attitude to poorly mixed music and shows.

For a true assessment, I decided to take the FX Audio Tube 03 down to my bench system. The speakers used in my bench system are the JBL 2500s. The reason behind doing this was to avoid any placebo that may have occurred by listening via my main system.

This gave me a way to accurately judge what the FX Audio Tube 03 does to the sound after the tubes were burned in.

Before I added the Tube 03 to the system, the sound signature of this system was relatively simple. The receiver is a vintage General Electric system from the late 70s. It has a mildly warm sound that I always found relaxing. But still is very clear. But, the soundstage wasn’t it’s strong point.

The JBL 2500s have managed to create a decent soundstage despite that. But with the titanium dome tweeters on them, they were almost too bright. They could get fatiguing after long listening sessions. I wanted to do two things to this system. Tame the fatiguing top end of the JBL 2500s and give the soundstage a bit more depth.

After hooking the pre amp tube buffer into the system, I let the pre amp warm up before even starting playback. After a few minutes, I started playback again. The difference was big.

The first thing I noticed was the change in the soundstage. It seemed a bit more spacious. There was added depth which surprised me being that the receiver was the weak link. This was likely due to the way a tube buffer operates. The output voltage was now correct between this late 70s GE receiver and my sound card.

The second thing I noticed was how the upper mid bass/lower mid range changed. Before, one of the few things this system let me down on was having a dip in this region. That dip was gone completely. I could no longer separate these two regions giving me a more complete sound signature.

Lastly, I did have to crank up the treble a little to bring the top end back. But once I did that, the top end was now much more smooth. Before, it seamed like it had a slight “staticky” type sound. The average person wouldn’t have noticed this. But I did. I do believe it was due again to the voltage mismatch between the receiver and sound card. After adding the tube buffer, it was gone.

The top end went from a “jagged” sound to a smooth like ice sound.

In the end, this made me want to buy another Tube 03 for this system. I ended up listening to music that night until I was tired. The sound kept me from wanting to stop. Anyways, thanks for reading. Now it’s your turn to listen!