Before I get into the review, I want to start off by saying I’m glad Joe Born decided to revive Aiwa. For those unfamiliar, Aiwa was one of the best budget audio brands out there. They were so good that Sony, a brand that not only makes audio equipment, but owns a majority of the entertainment industry couldn’t come close. Aiwa started to run into financial troubles in the late 90s. By the early 2000s, they’d been bought out by Sony, their competitor. Sony kept the brand alive for only a couple years while they slowly killed it. Thanks to Joe Born however, Aiwa came back with a vengeance in 2016 with the Aiwa Exos 9.

How my childhood dream became a reality.

While growing up, I was influenced by my Dad’s HiFi system. Specifically the Yamaha speakers that I have recently written about. I also was handed down an old home theater in a box system that had a small subwoofer. Thinking to myself, I thought that pretty much all boomboxes were designed with lightweight in mind. I thought the smaller sub woofer still had a decent amount of low end for it’s size. It also didn’t weigh too much or take up that much space. I thought to myself “why hasn’t someone taken one of these compact subwoofers and attached smaller stereo speakers to each side”? This was back in 2008 where Bluetooth speakers weren’t really a thing.

Fast forward to the Bluetooth era.

As I got older, I admired the old Aiwa brand. My sister had one of the old Aiwa shelf systems from the early 2000s. It sounded stellar for what it was. It also got real loud for it’s size. We’re talking ear-piercing loud. All while I got to experience this beast, these puny little portable Bluetooth “speakers” started to pop up. Again, looking at this Aiwa system, it only had 5.25 inch woofers. It also only utilized 3 inch mid range drivers and a set of doom tweeters. The Aiwa receiver that powered these speakers didn’t weight that much. Even though it housed a built in tuner, CD changer, and a dual cassette deck. I later learned about class D amplifiers. This system was so light but powerful due to the fact that this Aiwa shelf system used a class D amplifier. “When was someone going to do something smart with this technology?” I thought. This was around 2013 when MP3s were considered good enough to most people. Which, these people also wanted the smallest speaker that sounded sub par to even the boomboxes that disappointed me in 2008. 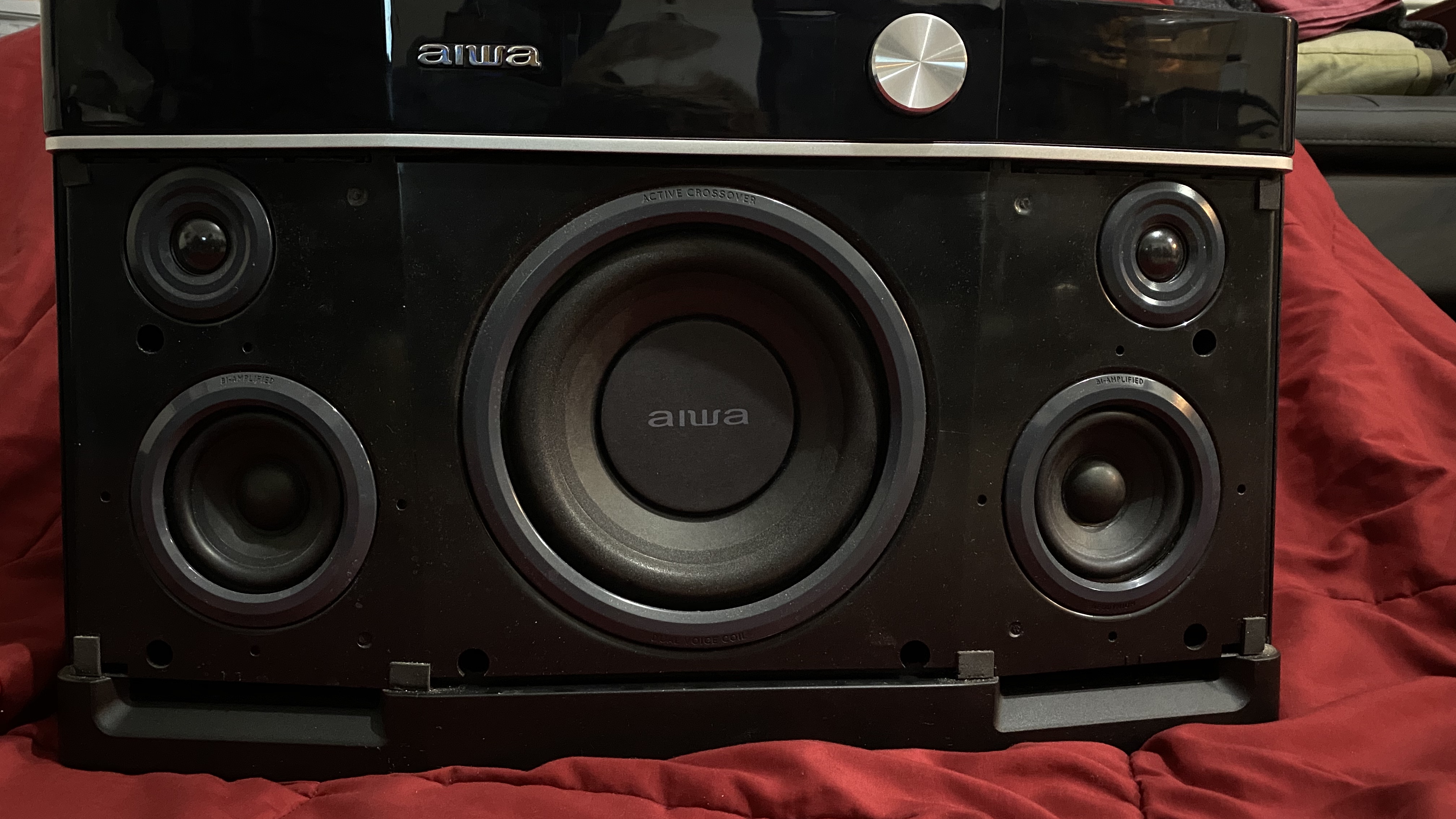 I had already started my collection of audio gear. I was on YouTube looking at audio gear in action when I came across an Unbox Therapy video. I read “Aiwa” and clicked on it right away. I wasn’t expecting to see that brand never ever again on a new product. That caught me off guard (I almost flipped out). I watched before my eyes could even believe it. A new Aiwa product with a design that looked familiar. A smaller sub woofer (6.5 inch) with a mid range and tweeter on each side. Basically exactly what I dreamed about growing up. I looked it up thinking that it was some practical joke. I landed on the new Aiwa website which showed up slightly below the original dead website. I read about it and found out that it was the best Bluetooth speaker rated on Amazon. 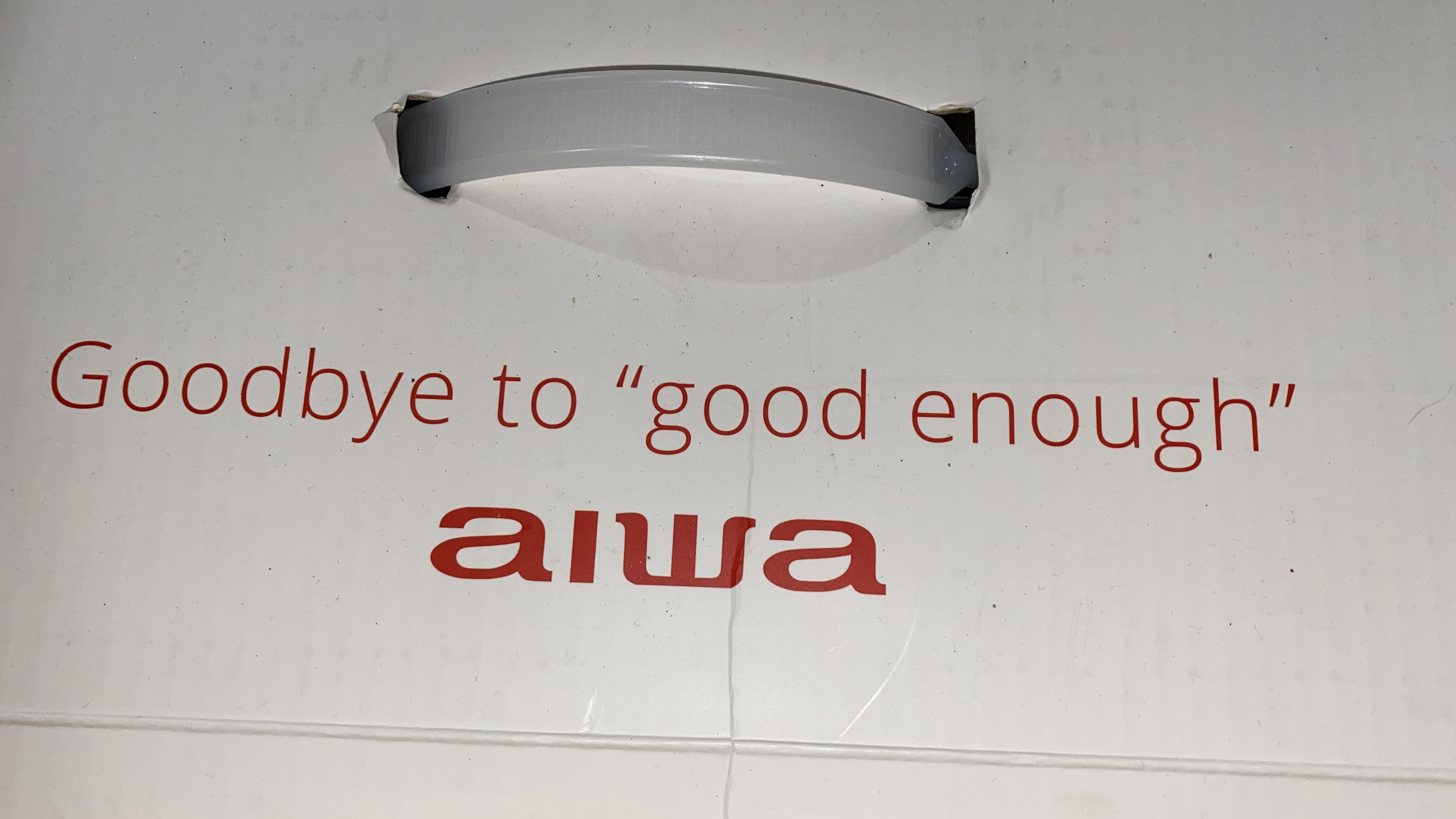 After reading through all the reviews, I took the plunge and ordered the speaker on Amazon. It was on sale for $300 instead of $330. At that point, I was anxious. I’ve never felt so anxious for a piece of gear to get to my doorstep. Although I have Amazon Prime, It felt like 2 days was taking two weeks. Then finally, I heard a knock on the door. There was this big box that I signed for that said “Aiwa” on it. As soon as I got it in the house, I ripped that box open to find the Exos 9’s box. The box basically stated “home stereo sound on-the-go”. On the side however, Aiwa made a statement that got me. The box stated “Your main system might get jealous. Or Replaced”. They basically threatened my main system. That’d be either my desktop setup or my Yamaha setup. Upon opening the box, all you see is ‘Say goodbye to good enough”. That got me even more excited. I lifted that and there it was. This big bad Bluetooth speaker and with it, it’s big lithium ion battery. Within seconds, I had that battery installed and my phone paired.

Sound Shock – That moment when you can’t believe what you hear.

The sound shock hit me as soon as it started playing. It sounded almost exactly like the old Aiwa shelf system my sister used to have. I proceeded to raise the volume. Not long, I had music blasting me away (the speaker was on my lap). Not only was it loud, it was full with plenty of low end. I decided to mess with the equalizer. I decreased the mid bass a little bit and increased the sub bass. The Aiwa had plenty of head room. This extended the low end to home stereo levels. I increased the treble and decreased the mid range a little (estimated around 1KHz). I prefer my sound to be a little V-shaped (laid back mid range). I increased the mid treble a little to bridge the gap between the mid range drivers and dome tweeters. The result was the type of sound I’d expect out of a HiFi system. I was lost for words. The box did not lie as I was left speechless. The low end was punchy yet deep and accurate. The mid range was as transient as most of the speakers I have in my collection. The treble sparked a memory of that old Aiwa shelf system. The treble was just too good to be true. Bluetooth wasn’t good enough however. Even though I was streaming Tidal, My iPhone doesn’t support aptX, the lossless Bluetooth codec (Thanks Apple). I paired my laptop to the Aiwa Exos 9 shortly thereafter.

AptX – The improvement was significant.

Upon pairing my laptop to the Aiwa Exos 9, I was shocked. The Aiwa started sounding like a HiFi system in a box. The sound quality was matching my component speakers. I new I had truly bought my new favorite toy. As always, I hope my review of the Aiwa Exos 9 helped you make your decision. It’s always good to research audio gear before taking the plunge. For now though, enjoy my video of this beast!

My Aiwa Exos 9 was paired to my laptop. I had Tidal set to stream straight to it with exclusive mode. This allowed the use of aptX (the lossless Bluetooth codec).